Home / Uncategorized / CHANGE IS AS GOOD AS REST 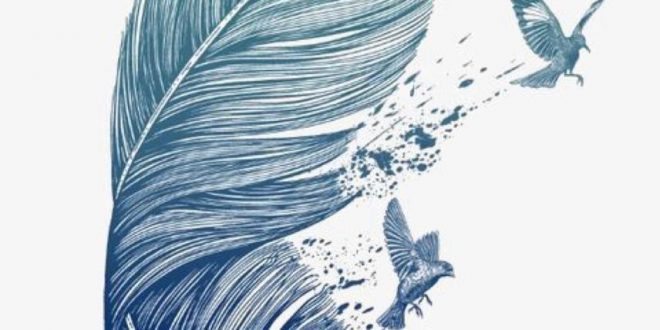 CHANGE IS AS GOOD AS REST

You might have read or heard of the book authored by Dr. Spencer Johnson Who Moved My Cheese. It is a story of four characters who live in a maze: The mice scurry and Sniff and two ‘little people’, Hem and Haw. All the four characters were living in comfort without a worry because they had found a station with a very big piece of cheese. The only problem is that they did not notice it was getting smaller day by day. Hem and Haw were happy only to one morning arrive to the station to find the cheese gone. They were devasted to say the least.

The little people Hem and Haw had built their lives around the big cheese, they had even moved their homes closer. This particular cheese station was their familiar territory, a well-trodden ground, it was their “inside the box”, their own backyard, a no risk undertaking. It was simply their comfort zone.

It was only within their rights to feel like victims, victims of fraud and theft and so they clung on to the cheese station with hopes that whoever took away their cheese would return it – they went hungry. The mice, Scurry and Sniff on the other hand quickly accepted the fact that there was no more cheese and off they went in search of another cheese station and found many.

Hew became very depressed; they became interested in the whereabouts of Scurry and Sniff. Ham thought the mice might have an idea of who took their cheese. Ham and Hew had a sense of entitlement to the cheese, as you might have noticed dear reader. Hew had analyzed and asked, “We’re smarter than them? (The mice that is) We’re entitled to our cheese!”

Haw decided to set out in search of another big cheese station but Hew was scared. They took their running shoes and off they went. Hew said that he was comfortable at the old station with no cheese, it was dangerous out there, he was old and did not want to make a fool out of himself and so he went back to the old cheese station leaving Ham to the journey. Every time the fear of failing creeped in Haw visualized himself with new cheese and kept going station after station. He would find small crumbles of cheese here and there, eat and keep moving. He noticed how things had changed since the last time he was in the maze, he would laugh, write a message on the wall in case Hew decided to follow him and continue in his search. 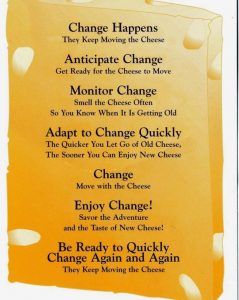 What lessons did I derive from the book, you might wonder? Inferred out of the handwriting on the wall I learnt;

Change is constant. It is the only thing that is, change is bound to take place whether we want it to or not. It is always good to be fluid and accept when things are taking new shape and adapt. It is okay to be afraid but do not let the fear cripple you from moving forward or taking risks. Always be on the lookout of dynamics, the world keeps changing every now and then. Be alert.

Be like Sniff the mice, always anticipate change and change accordingly in the market place by updating that which needs to be updated. The competitors are not sleeping. Model Scurry, who is action based, he wants to get things done. He is quick to jump into action and adapts like Haw. Haw might have been hesitant at first owing to fear, but he quickly overcame it by being open-minded enough to allow himself to learn new ways because things had changed a lot since the last time he was in the maze. It is my hope that we gradually let go of the Hew dragging and lagging us behind out of familiarity, fear of change, getting out of the comfort zone, starting over etc. Change is as good as rest. 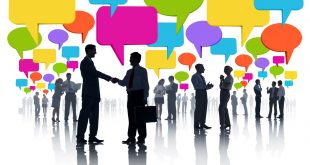 THE OUTSIDE HAS OPENED. NETWORK!